What it means to be a number 2 wrestling promotion 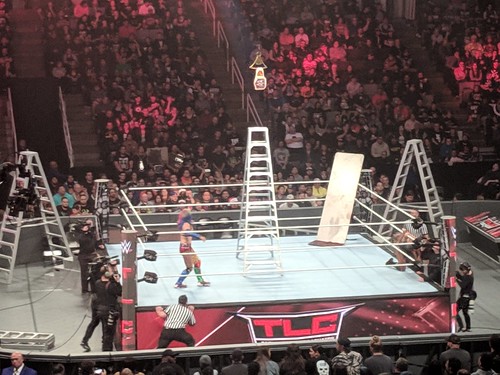 The first thing a number 2 promotion is a place where people unhappy with there position with the WWE would have a chance to get higher on the card on the number 2 promotion.  I can only think of one time someone jumped from WWE to Impact to improve their standing, Christian Cage.  For a real number 2, it has to be a place where people regularly leave the WWE and improve their presentation.  In 2016 in Impact had a run of duds like when people like Damien Sandow went and had no impact.

A number 2 promotion needs a TV deal with a cable channels owned by a major company.  That means being owned by Comcast, Disney, Viacom, Time-Warner, Fox.  Right now only one American promotion is in this category and in 2019 they will be on two of the big five.  As much as we want to say this is the streaming video era, television rights deals are still where the money is.  It will be this way for the foreseeable future.  I do not see this changing before 2030.

A number 2 promotion needs to have 50 live events with a total of 250000 ticket sales. These numbers seem kind of small compared to WWE, but much larger than any other company can do in the US right now. Last year ROH sold about 50,000 tickets.  A number two promotion also needs two travel events a year where they can sell out a 15,000, without piggy backing on Wrestlemania Weekend.

Not running live shows is one of the ways Lucha Underground stagnated.  I think the WWE did a good job of developing NXT by having it tour nation wide.  Selling 5000 seats a show would put a number 2 promotion in the same category of buildings NXT run in many places.

This is a tricky thing for a couple of reasons.  A young promotion would not have a back catalog to put on a streaming service.  That means a new content needs to be created without cannibalizing the above TV rights deal.  A service would need 12 live events a year.  It would also need 100 hours of new content a year.  There are a lot of wrestling companies out there with video.  For my roster and in coming wrestlers, I'd license video from smaller promotions. I think promoting indies would be a benefit to a number 2 promotion and it would build the credibly of the new wrestlers on the roster.

I would also put the fees higher than the WWE.  If you are making a premium product, charge a premium fee.  I would tell people I have a better product than the WWE, that is why I deserve more money.  In general you need to attract the people who would pay for wrestling before Netflix.

Let me know if you have better ideas for the numbers we should be looking at here.