I have been seeing news stories about Disneyland's Tomorrowland needing a redesign.  A lack of an announcement out of D23 made these stories come up.  This has made me think about what kind of redesign of Tomorrowland could be done. I think there are lots of ways for Tomorrowland to be done poorly and only a few ways to do it well.

There are two things to think about when it comes to Disneyland.  The first is how everything new over the last few years at Disneyland has to do with Disney IP.  I am not sure what Disney IP has a great translation to a new Tomorrowland ride.  Pixar, Star Wars, and Marvel already have other places in the park.  You could dig up Tron, Black Hole, or even Treasure Planet, but all of those have a slightly backwards look to them.

The easy play for Disneyland is Retro Futurism.  While there is currently a strong Retro Futurism vibe to Tomorrowland, I think Disney could do this again and use other Retro Futurism elements.  I think you could mine Buckminster Fuller and Frank Lloyd Wright for many design concepts.  You can take these elements for a steam punk or a cyber punk flavored world.

When I think about current modernism, I think of glass and steel skyscrapers.  I am not sure you can do that at Disneyland.  I also like the idea of organic look of futurism.  You could make things that look like Arcology, like in Sim City 2000.

In the end, unless you have an idea of a Tomorrowland of the the year 3000, futurism is a tap.  This is the part of Disneyland that goes out of date the quickest.  You can make little adjustments to Fantasyland or Main Street USA and keep their character intact.  Tomorrowland can only look toward the future for so long.  I think this conflicts with one of the main draws of Disneyland, nostalgia.  If this land is always changing in big ways, it is hard for generations of Disneyland fans to share this world. 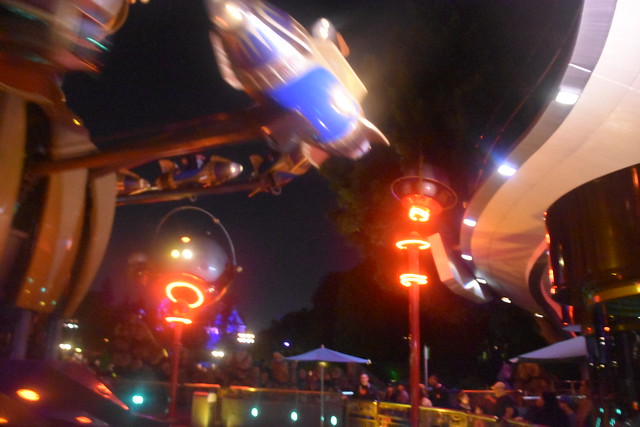