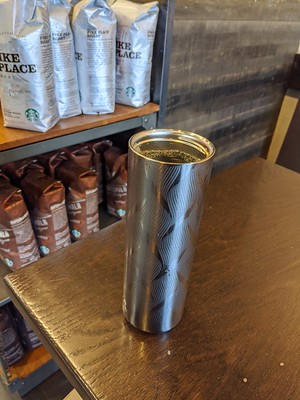 For the second year in a row I bought the Starbucks free coffee in January coffee cup.  When I do this I try to get as many of free cups of coffee I can in a month.  Since I was also trying to ride my bike a lot this month, I wrote my bike to many local Starbucks.  I seem to gamify these things.  I didn't drink every drop of coffee.

Most of the time the coffee rung up at 2.65 a cup.  There are a few stores that charge $2.85 for a Grande hot coffee.  Some people rung up the cup as a tall, at $2.15.  A few baristas didn't ring up the cup of coffee at all, mostly in the afternoons.

After this I want to spend a little less money on Starbucks coffee.  First thing is I'm going to make more use of the office coffee machines.  I'll make my own Americano over ice out of the fancy coffee machine.

I've been saving up my reward stars.  I have about 1900 to spend.  Instead getting an iced coffee from Starbucks, which is 150 stars, I'll just get a hot coffee and a free cup of ice, which is just 50 stars.  This will stretch my rewards out a fit further.
Labels: coffee number self Starbucks stat