Or why hasn't anyone deleted GarageBand from Rich's iBook 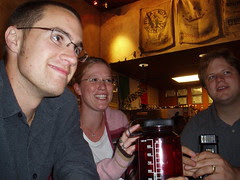 What are we talking about here
Originally uploaded by Rich Thomas.

Last night was the flickr meetup. This time there was actually Flickr people at the coffee shop and not just 9/11 conspiracy theorist. We had a good time. Courtneyp brought a couple of posters like the flickrverse . Jonchan, Klugarsh, lissabird, Kris247, Wirehead, and bjorke were all there.