My most viewed photo ever 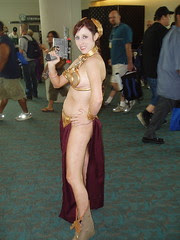 At Comic Con one of my goals was to photograph people in cool costumes. Once I saw women dressed in the Princess Leia Slave Girl Metal Bikini, I knew that I had to take a picture of one of them.

I was lucky enough to run into one who was willing to pose for a picture for me. I like her costume because she even has the blaster. She even struck a cool pose for me.

Everyday on my vacation I uploaded photos to Flickr. It was the place where people could watch the highlights of my vacation. It was easy then updating Sad Salvation.

To my surprise this picture became my most viewed picture ever within two days. It currently has as many view as my next four most viewed pictures combined. I guess I should not be surprised that a lot of people like it. There is a whole Friends episode about this.

Now my goal is to get this picture 1000 views. I am not sure how the counter works on Flickr. I am not sure the best way to get more people to view it. I want everyone to check out this photo.