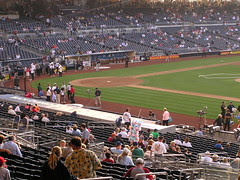 When I was in San Diego I too the opportunity to go to Petco Park. I do not think I will have the chance to do another baseball roadtrip this year. Since Petco is new since the last time I was in San Diego, I thought it would be cool to visit. I am taking my time, but I would like to visit all the big league ballparks.

I like Petco park because it does not have the retro look that many of the new ballparks have. It did not feel like it was trying to be an old New York or Chicago ballpark. It is not brick all over the place. It feels modern, but it does not feel like the 70's cookie cutters. It feels like a cathedral of baseball like all good ballparks. I am happy that a ballpark can be cool without having to be retro. I feel that the retro trend is starting to get old. 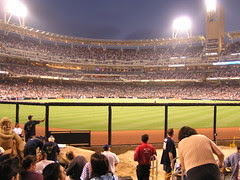 in the outfield
Originally uploaded by earthdog. I sat in the bleachers section of Petco park. The tickets are only $8 which is really cheap for a big league game. The problem is that the view from the bleachers is not really good. The bleachers are on filed level. I have never watched a game from field level in the outfield. It is a really odd prospective. It is a cool place to hang out, but it is not a great place to pay attention to the game. 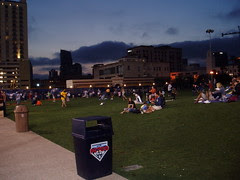 park in the park
Originally uploaded by earthdog.


In the back of the park there is a grass field. It is called "The Park In the Park" It is this field with a hill in it. It looks like a place people would want to have a picnic. For $5 you can get a park pass ticket. This is a standing room ticket that lets people sit back here. You cannot see the field, but there is a giant screen which you can watch the game on.

I think this is a stroke of genius. If I lived in San Diego I would come down and sit in this area all the time. If I had kids this would be perfect. They could run around and I would not feel like I wasted money on a baseball game. I think this make Petco Park the most family friendly park in the major leagues.

I think that the Padres have done a good job with this park. I think that all the parks in the big leagues should be this cool.