Travelblogue: caveman robot and other comics 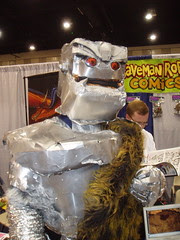 I always bring back too mush stuff from Comic Con. I could have spent $1000 if I had it. I wanted to buy things from a lot of artists. I wish I had the money to support everyone. I had to limit it somewhere. Maybe I had to find a way that people will give me stuff for free. Here is a list of things I came home with.