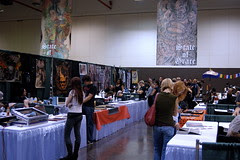 State of Grace: The Floor
Originally uploaded by earthdog.

I went to the State of Grace Tattoo Show in San Jose on Saturday. Tattoos are one of my favorite things to take photos of. They seem to get a lot of views on my Flickr Photostream. I wondered what I would see at a show like this. I saw lots of people with tattoos, but few chances to take photos. People seemed too caught up in everything to ask them to stop for a photo.

I was there because I am thinking about getting a tattoo. I have been thinking about it for a while. When I was young I thought the idea of a tattoo was stupid. I could not think of an image that I would want on my skin forever. That might be a good thing. I know I would have made a bad choice when I was young.

With age comes wisdom, hopefully a little wisdom. I know what I would get a tattoo of, a hippopotamus. I like the hippopotamus because it is very awkward in one setting but very graceful in another. That is how I feel much of the time. I just have not seen the image of a hippopotamus that I want on my body. I have the feeling I will know the image once I see it, but I have not see it yet.

Going to the tattoo show was an eye opening. It was cool to see people get tattooed, but it seems like a very intimate activity to do in on the floor of a convention. Lots of people were doing it. I wanted to ask more people about their tattoos, but it did not seem like the thing to be done.

I spent a lot of time looking at books of tattoos. After looking at all those books of tattoos I learned a couple of things. The books seemed to have a lot of the same tattoos in them. There were a lot of dragons, birds, hearts, spiders, dice, pinup girls, and playing cards. I wonder if people fill their books with tattoos that look the same because of the audiences at these shows. I did not see any hippopotamus tattoos in any of the books. But I did not see any Monopoly, Tick, or Pacman tattoos either.

There was a lot of good tattoo work at this show, but very few of the artists had examples in their books that made me want to get work done. I know that a first tattoo at a show is not a great idea. I talked to a few people. Out of the few artists I liked, I found one local one who I would think about getting a tattoo from, Holly Ellis of Idle Hand. I liked the number of styles in her book. It made me think I could get a tattoo that I might like.

If you have any tattoo advice, ideas, thought, stories, or images for a hippopotamus tattoo, please let me know.

I met a woman who got a tattoo right before she left the bay area. She was moving back to New Hampshire. Maybe I will get a tattoo here before I leave.