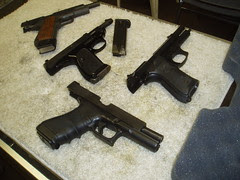 Guns
Originally uploaded by earthdog.
I went shooting with a friend last week. He is a gun enthusiasts. We got talking about a story I was writing and that got us talking about guns. He enjoys going to the range and he invited me to go with him.

I have gone to a shooting range before, but it was years ago. I had never shot anything larger than a .22. We would shoot .22 rifles in Boy Scouts. Those were always in outdoor ranges. Where we went to shoot the .22 pistol was an indoor range, but it was cavernous compared to the place we went this time.

This time I shot a Colt Model 1911, .38 Special, Walter PPK 9mm, Glock 9mm, and a Berreta 9mm. I shot the Colt Model 1911 first. This is a mythic gun to me. It was the side arm of the US Military for most of the 20th Century. I have read a lot of stories that are focused around the M1911. When I shot it, it was louder then I expected. It also had more or a kick than I expected. The sound was a little overwhelming. I would be focused on the target aiming, I would squeeze trigger, and the flash would surprise me.

The .38 Special made a lot of smoke and spewed a lot of GSR. I wanted to shoot this gun because I was thinking of it for a story. My friend liked to call it his Joe Friday special. This gun felt small in my hand. It was like the stock gave me nothing to hang onto. I did not enjoy shooting it.

If I wanted a gun that I could hit what I was aiming for, I could chose the Glock or the Berreta. Both of these guns felt good in my hand. I was a little more comfortable with the Berreta. I was a little more accurate with the Glock. Both of them seemed to fit my hand right. I know if I was to buy a gun it would be one of these two guns. I would like to shoot with them some more.
Labels: Berreta Colt Colt M1911 glock gun shooting Walter PPK