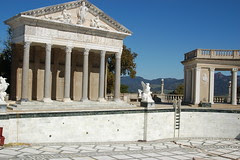 Neptune Pool
Originally uploaded by earthdog.
Today I toured Hearst Castle on the central coast. On my current vacation I have been trying to do things that I have been putting off. The top of the list are Hearst Castle and the Getty museum. I picked Hearst Castle because it is closer, would cost me less to visit it, and there is a much better chance I will go to Los Angeles in the future. I have a hard time seeing myself just happening through San Simeon.

I have to file Hearst Castle under crazy California homes of Rich People. Currently the other place in that file is the Winchester Mystery House. They both have a lot in comment. Never ending construction, never finished, owners who kept on changing the plans, and ended up being historic sites.

I know that William Randolph Hearst just called it the Ranch, but a castle is a good name for it. You can see how visiting the castles and residents of Europe influences. It reminded me of the Würzburg Residence. Both building were build to impress the guests who came to visit. I wonder if it was a way for Hearst to remind people who came to visit who he is. No matter what kind of Hollywood star you are, you are not as big as William Randolph Hearst.

Walking though the building I just thought to myself, "of course this place is in California. California is a place of people putting really big dreams into action. You would have to dream really big to build a place like this. It is on the top of a hill that is 1000 feet up. The place has amazing views of the country side and of the ocean. It is just an amazing place.

The building is amazing, but it is also a mis-mash. Both on the inside and on the outside it is a strange combination of styles. The building complex exterior is a combination of Spanish, Italian and Ancient Roman. In my head I can hear an architectural snob declare how the different style clash. You get the feeling that Hearst could not make up his mind. He wanted everything.

On the inside there are a ton of different art styles. I cannot even count how many different countries the art came from. It is almost dizzying. I bet that is what Hearst was going for. I bet it looked better when it was a house and not a museum. Now it is too much to take in. All the different styles were too much.

There is something about the Hearst Castle that made me a feel a little sad. I get the same feeling when I go to the Winchester Mystery House. All of these effort went into making this house, but now it is not a house. If feels like it is a little dead. It would be better is someone was living there. Since it is just a display piece now, it has lost a little of what made it special. Worst of all it was only in use for 29 years. It has been a state park for almost 50 now.
Labels: California Hearst Castle tag overload travel Wikipedia William Randolph Hearst