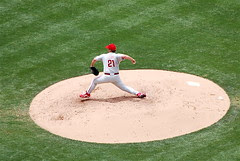 Phillies V. Padres in San Diego: Pitching
Originally uploaded by earthdog.
There is nothing like watching a little baseball as the days get longer. even if I am just watching on TV. There is something about baseball that usually puts me in a better mood. That is as long as the Phillies are not finding a dumb way to lose.

Speaking of the Phillies losing, They are only 15 losses away from 10,000. That will give them the most losses in the history of pro sports. It has only taken the Phillies 124 years to reach that mark. There are older teams and worse teams, but no older worse teams.

Even a good baseball teams lose 60-70 games. That is more than the below average basketball or hockey team loses. The Phillies had 50 years of being the worst team in baseball. Think about how long they were bad. I think that has something to do with why I am a fan.
Labels: 10000 Losses bad baseball history Phillies pro sports