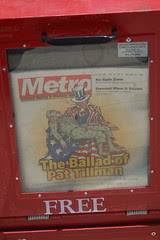 Shame
Originally uploaded by earthdog.
I have heard Army officers talk about honor and integrity. Majors, Colonel, and Generals give speeches to soldiers about what the uniform means. I have always believed them. I have always thought the best of people who choose to serve their country.

The Metro recently did a story about the death of Pat Tillman. Reading about the cover up about how he died and how if family was treated upsets me. Reading the story makes me sick, angry, and sad.

What is most upsetting is the lack of honor and integrity in the people who tried to cover it up. What where they thinking? Did they think lying would make things better. This is a disgrace. If a man or woman is will too put themselves in a position where they could die for the country, you should honor their memory. A heroic lie is less honorable than the truth of Friendly Fire. Pat Tillman and his family deserved better. Now Pat Tillman will always be linked to the dishonor of the men who did not respect him.
Labels: Army flickrpost honor Metro Pat Tillman US Army