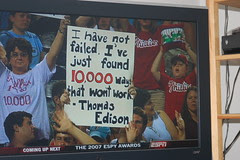 Phillies 10,000 Losses on ESPN
Originally uploaded by earthdog.
The Phillies did it. They lost their 10,000 game all time. It only took a 124 years to get here. That is 124 in one city. The Giants have over 10,000 wins, but that is split between San Francisco and New York. The Phillies have all their losses as a Philadelphia team.

The Phillies only have 8811 wins all time. For they Phillies to get back to .500 all time they would have to go on a winning streak until September 2014. If the team has 100 win seasons, 100 wins being the gold standard for good baseball times, until the team reached .500 it would take almost 30 years. It will be a few years before any other team gets 10,000.

The number 10,000 is a number the fans can be proud about. The only people I know who have a link to all 10,000 loses are people who have grandsons of fans.

That, my friends, is Phillies baseball.

I think that Phillies fans should celebrate 10,000. If I was in Philadelphia I would have tried to be at the game.

I left Philadelphia. I left the area I grew up in. Part of my heart are still back there. It would be easy for some to latch onto another team. Not me, the Phillies are my team, 10,000 losses or not.
Labels: baseball flickrpost MLB philadelphia Phillies