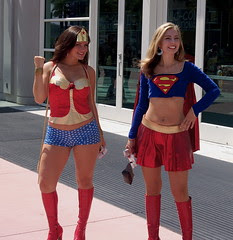 Comic Con 2006: Wonder Woman and Super Girl
Originally uploaded by earthdog.
This is my second 1000 view photo. This was taken at Comic Con 2006. Yes my two most viewed photos are from comic con. Fifteen of my twenty most viewed photos are from comic con 2006 or comic con 2005. I do not think any of the photos from this year will make it that high. I think some of my photos got big blog attention in those years.

It is easy to see why this photo had received so much attention. This photo is also my most favorite'd and most commented upon. Lots of people have a reason to love it. The funny thing is that is not all that good of a photo. I guess there are other things more important than technical proficiency.

It will be a while before I have my next photo reach the ranks of 10,000 views. The next closest photo has around 3000 views. When it comes to getting this many views, I have no idea what I can do to impact it. I have to hope that other people promote it. Maybe I need to make a set of photos that are not women in costumes that I want people to look at.
Labels: flickr flickrpost tag overload views women