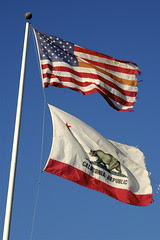 Flags
Originally uploaded by earthdog.
It has been six years since 9/11/01. It might be the biggest thing that has happened yet this decade. I have lived in San Jose eight years tomorrow. Six of those eight years have been since 9/11. That event set the stage for my life here.

One of the things I remember about that day was how quite the streets of San Jose were. I walked around the streets after dark and there was no one around. I remember how the whole city felt empty. That is one of the feels that stuck with me.

My life in California has been mostly post 9/11. For most of 2001 I wanted to move back to Philadelphia. It was not until after 9/11 that I really came into my own in California. I know that day change my life. I know that approached my life in a different way after 9/11. I tried harder to be more engaged in what was happening around me.

I am not sure how big of an impact 9/11 really had on the world. Would George W. Bush found another way to invade Iraq without 9/11, maybe. Would have something else happened if 9/11 did not, maybe. Is 9/11 really that important in the history of the world, it is hard to say now, give it time. I can say that my life is different because of 9/11. That is what I will remember.
Labels: 091101 9/11 San Jose self