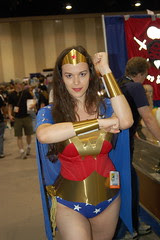 I wonder if the hard part of Wonder Woman is that she is so Iconic, but what she stands for has changed a lot over the years. To be honest, Batman and Superman have not changed all that much in the past 75 years. They have had a lot of character development, but they are still icons of something easy to understand.

On Yahoo Answers someone asks if DC should change how Wonder Woman dresses. I think the answers are pretty interesting. It says a lot about how people see women and Wonder Woman. I think these questions should exist inside of the the comic book also