Roger on a different hill 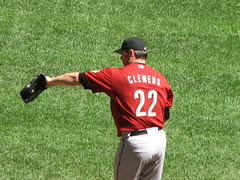 Roger"The Rocket"Clemens
Originally uploaded by Gbfan.
I worked from home today so I got the chance to watch Roger Clemens in front of Congress. After watching that, Roger Clemens comes off as someone even less credible. He did not seem like someone who cannot admit what he has done. If felt like your ego was keeping you from the truth. He seems like he does not want to lose his reputation. After watching all that, Brian McNamee might be a lier, but I trust him more than I trust Roger Clemens. This might have hurt your bid to get into the Hall Of Fame more than anything else.

What got me is when he talked about performance enhancing drugs and what he tells kids. He said that there is no shortcuts. The only want to succeed is hard work. To me this is a sign he totally does not understand why people take performance enhancing drugs. I have known people to "juice" as we called it back in the day. They did not do it so they could skip workouts. They did not do it because they wanted to sleep in and not work hard. The did it because they wanted to be better and were willing to do whatever it took to be better. They wanted to cross that gap between what they could do on their own and what they could do with help.