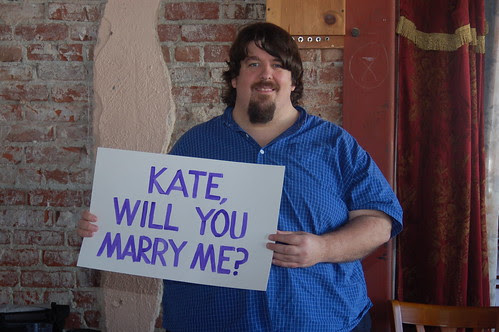 I asked Kate to marry me in Portland and she said yes. Yes, I asked her on March 17th St. Patrick's Day, but I am getting a head of my self here.

Kate and I started Monday by sleeping in. After breakfast and internet at the Kennedy school we looked for places to get Kate's nails done. We drove around Portland for a little bit before meeting Sean for lunch.

The whole time all of these things happened I was trying to figure out when I was going to ask Kate. Kate knew the proposal was coming soon. She knew that I ordered a ring but I did not have it with me in Portland. Knowing that, Kate has accused me of being kind of "squirrelly". She knew something was up.

I figured my only chance was to make her think I was going to do something at Dinner and ask her earlier. After a couple of text messages with a friend I decided I was going to ask her on the Hawthorne bridge in the late afternoon. I wanted to get my hair cut first. I was just hoping that the weather would hold out. 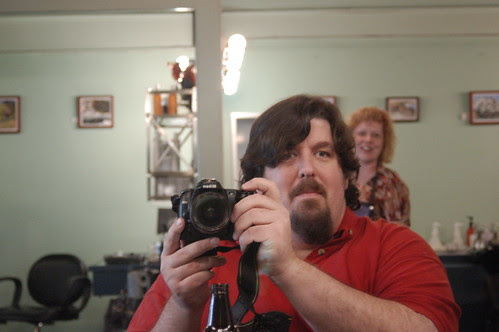 I had an appointment for get my hair cut and Kate had a nail appointment. My best friend for high school and college, His sister Shannon is a hair stylist in Portland. I had seen her over Christmas. She said she would be happy to cut my hair. We tried to hook it up two years ago, but the timing was all wrong.

It was cool to have my hair cut away from home by a person who knew me. It was a good haircut. I do not have a hair stylist in San Jose I like this much. If I lived in Portland I would go to Shannon at Dirty Little Secret all the time. 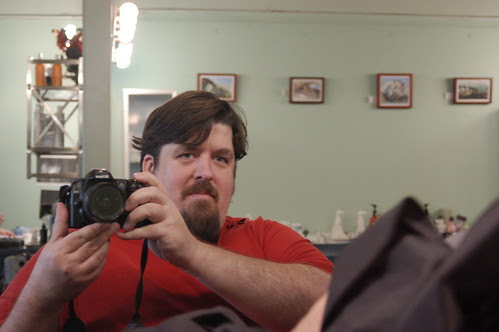 I told Kate after the Haircut that I wanted to take some photos of her on the Hawthorne bridge. Earlier in the trip I told her how the Hawrhorne bridge in Portland. Not only did it go between two of my favorite parts of town, it is also a beautiful bridge. Since I take a lot of photos it was not hard to convince Kate that I wanted to take her photo on the bridge.

I knew that I wanted to ask Kate with a photographic months back. I got the idea while we were in Philadelphia after Christmas. I wanted so way to ask Kate that I could later post on Flickr. In February I had Peter Conrad make the sign for me and take the photo of me. The photo of me at the top of the post was taken at the place where Kate and I had our first date, Mission City Coffee.

On Saturday I had Don run out and make a print for me. I knew that I was not going to be able to slip away from Kate for long enough to get it done. This lead to the whole thing with me acting "Squirrelly".

I walked Kate on the bridge and started taking some pictures. After a few pictures I said I had a prop for her. I handed her a bag with the photo in it. The print was 8x10. She looked at the photo and was surprised. She did not expect me to ask her there in this way. I am happy I could surprise her. I told her there were two more signs in the bag, 'Yes' and 'No'. I told her she needed to pick one of them out and hold it up. She held up the 'yes' sign. 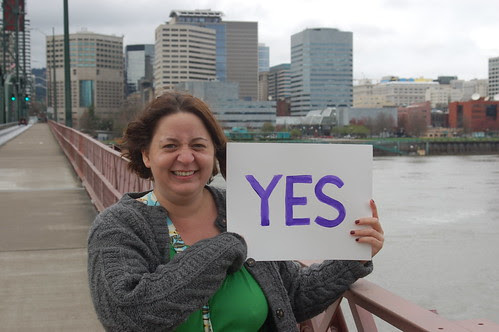 We were both floating six feet off the ground when we got off the bridge. We went back to the Kennedy school. It was packed when we got back there. St. Patrick's day attracts a lot of people to the Kennedy School. We used their soaking pool for a little while. It seemed perfect. The water was warm and air was cool. We were as close to weightless as we could be. We floated around each other was we talked about the future.

We headed back to the room to take advantage of the Romance package, which was a bottle of champagne on ice and two chocolate truffles. After a little time in the room we decided to get some dinner in the hotel restaurant. The wait for the restaurant was 90 minutes, but when you are staying at a hotel with its own brewery and six bars, waiting 90 minutes for a table is not too hard.

We had a lot of beer, chicken wings, tater tots while we waited. We mooned at each other over steak and beer for dinner. Steak has become a celebration meal for us. It seemed perfect that night. Lets just say we were pretty free with the drinks that night. Everything that night seemed to make us happy.

We stumbled back to our room after a few hours. When got there I wanted to make sure we finished I wanted to make sure we finished off the bottle of champagne. I paid good money for it and I did not want it to go to waste. It was a little warm and flat for sitting out, but that was fine by me. The only glass clean in the room was a pint glass. We ended up sharing that glass, trading it back and forth. I ended up Twittering "we finished a bottle of flat sparkling wine out of a pint glass. what a perfect day."

After that I had this Idea that we should go out side and look at the stars. We we got outside we found out it was raining. The sky was gray and we could not see any stars. So we ended up dancing outside in the rain. It was still pretty cool. It was the end of a perfect day.
Labels: kate Portland proposal tag overload travel travelogue wedding