Indiana Jones and the Hollywood Cash 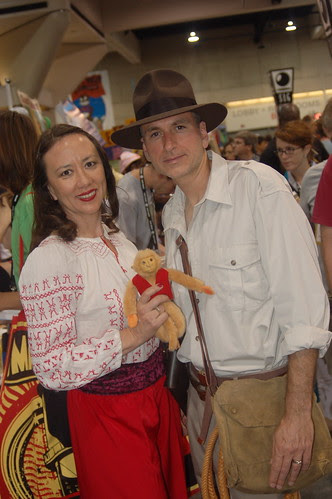 It appears that Indiana Jones really did find the city of gold. I am not surprised that the Indiana Jones movie did well. The previews looked good enough. It made people pretty sure they knew what they were going to get.

I went to see Indiana Jones and the Kingdom of the Crystal Skull on Friday. I saw it Friday at 10 AM in the morning. It was a work event. I liked the movie. If I had to pay for it, I might not have been so quick to go see it.

The movie was good enough. It did not change the way I view action/adventure movies and I did not feel like it was a waste of my time. It starts off well. It is cool that is starts with a scene in a hanger in Area 51. You even get a peak at the Ark of the Covent.

The pace was a little uneven. I felt like we were taking a lot of time getting from action scene to action scene. It could have used better puzzle solving when in the tombs. I like the relationship between Indiana Jones and Mutt Williams. I am not sure Shia LaBeouf makes for the most convincing Greaser. They still had decent enough chemistry for the movie to work.

I will worn you, if you need realism, do not see this movie. The chase scenes are straight out of Hollywood. Yes, Indiana Jones drank from the Holy Grail and that means that he is able to do cool things and land on cars after swinging on his whip. There is water fall scene where you totally have to give up any thought or realism. That is after the chase scene in the jungle.

I think the movie sets out to do what it intends to do. If you look at Indiana Jones as an homage to film serials it did a very good job. They even took the time to make a Tarzan reference. For the most part, Indiana Jones and the Kingdom of the Crystal Skull delivered on what it promised.

I think that we should expect to see another movie in this series. I have heard on TV that future movies would focus on Mutt Williams and have Indiana Jones as a supporting character. After this movie I think that could be done well.
Labels: Indiana Jones movie review