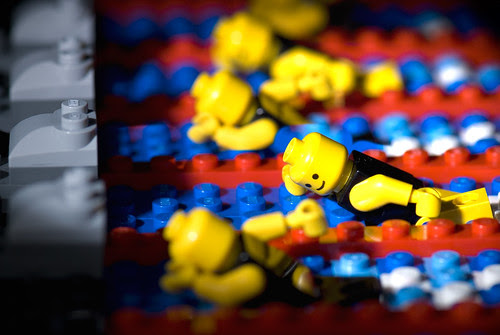 10. Dan O'Brian - Dan O'Brian is the kind of story that I love. Lots of people would have been crushed by what happened in 1992. It was his own fault he did not make the Olympics. He was able to keep himself on track to win the Decathlon in 1996. That is one of the things that make the Olympics great.

9. Karch Kiraly - One of the best players ever Volleyball. He is the King both indoor and on the beach. He won three gold metals in all. He has a cool name, gold metals, and he is a great TV announcer. I think every jock in my high school wanted to be Karch Kiraly.

7. Mary Lou Retton - Every American gymnastics gold metal since 1984 should give an assist to Mary Lou Retton. She is the face that launched a thousand careers. Everyone loved Mary Lou Retton and every little girl wanted to be her. She is an icon.

6. Kerri Strug - I know the story is cheezy. She had a broken foot and made the vault that won the gold metal. She stuck the landing with a broken foot. This is just amazing to me. I was at a bar when this happened and strangers where hugging each other after this.

5. Carl Lewis - Four Olympics, Nine Gold Metals, Jesse Owens' feat of winning four gold medals at a single Olympic Game, what more do you want? At Atlanta everyone talked about him, wondering if he could win another gold at the Long Jump and he did. On the track, he was electric. That is all you need to say.

4. Joan Benoit - There is something special about winning the first Marathon. She did it at her home country by more than a minute. That is winning when it counts.

2. Eric Heiden - I remember rushing to the TV to watch his races. He really caught my imagination as an 8 year old. The feat just seemed amazing to me. He had 5 individual metals. We talked about it forever when I was growing up.

1. Kurt Angle - I have only seen one Gold Metal one live. I will say that watching Kurt Angle win his gold metal live is the best sporting event I have ever seen live. It is the only time that I ever felt my cheering was having a direct impact on the outcome. It is the best ever.
Labels: athlete kurt Angle list olympics sports tag overload