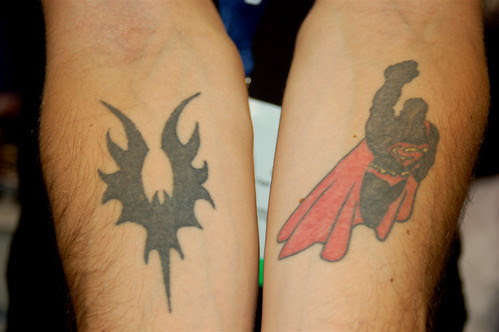 I am not surprised that Warner Brothers does not know what to do with Superman. The Dark Knight made so much money the logical thing to do is get more movies like it out into the market place. That would include a new Superman movie, Justice League, World's Finest Heroes Movie.

The problem is what do you do with Superman. Are you going to say that Batman begins and Superman Returns happen in the same world? Are you going to Reboot Superman all together to give it a new feeling? What kind of movie to you want the next Superman movie to be.

Christopher Nolan's Batman world seems hard to introduce superheros to. So far he has really sold the world as being a real life place. The Dark Knight really seemed like any American city. The world of Bryan Singer's Superman Returns seems to almost be in a different key. It makes me think the two movies would clash if you tired to mix them together.

You do not have to make Metropolis gritty and dark like the Gotham City. In fact the best way to do is for Metropolis to seem like Utopia while Gotham City is dark and gritty. I worry that no one can really fold another movie into the world of Christopher Nolan's Batman. Maybe you could also a Green Arrow movie there, but it would be hard to sell. Maybe the Dark Knight is so good, that Warner Brothers will not be able to cash in as much as they would like.
Labels: batman Christopher Nolan DC Comics movie superman tag overload Warner Brothers