Barack Obama and the Puzzle of Race 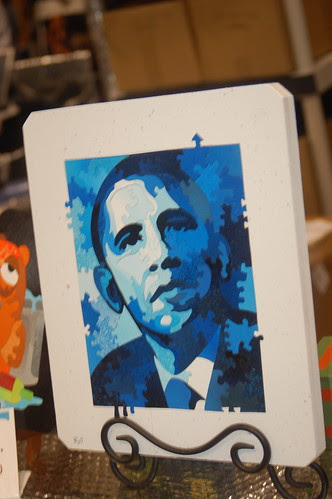 I have been thinking about Barack Obama a lot lately. This might be because he is on the media everywhere. I cannot turn anyway in the media without hearing about the inauguration. Everyone is talking about what he is going to do as president and how exciting this historic moment is.

Today being Martin Luther King Day I heard a couple news stories with Civil Rights Leaders. Many of the stories the leaders talked about Barack Obama. It is with out a doubt that Barack Obama would not be President without the Civil Rights Struggles of the 1960's.

It struck me a while ago that Barack is the first African American to become President, but he is not the descendant of American slaves. He is the son of an immigrant. In some ways that changes his story. This means something, but it is hard to say what it means. It is like there is too much history and too much heartbreak for the descendant of slaves to become the President of the USA. It is almost someone who had a different history could bridge that difference.

The question I have heard a bunch of times is "What will be different about race relations with Barack Obama as President?" I am a pessimist when it comes to questions like this. In the recent past I have seen riots in Oakland over a white cop shot an African-American man. I grew up outside Philadelphia when they had their first African-American mayor. I am not sure how much that did to improve race relations in Philadelphia.

I am not sure how things will change. I have heard people will say that there will be no more excuses. There will be no more, "You can grow up to be anything but President." Of course this will not change the fact there are still kids growing up in poor neighborhoods with underfunded schools. I have a hard time seeing Barack Obama change thought things in eight years.

I wish President-Elect Obama all the luck in the world. I want to see him be a great president. Right now he is all possibility. I hope all that possibility does not crush him.
Labels: Barack Obama Martin Luther King Jr race Wilson Goode