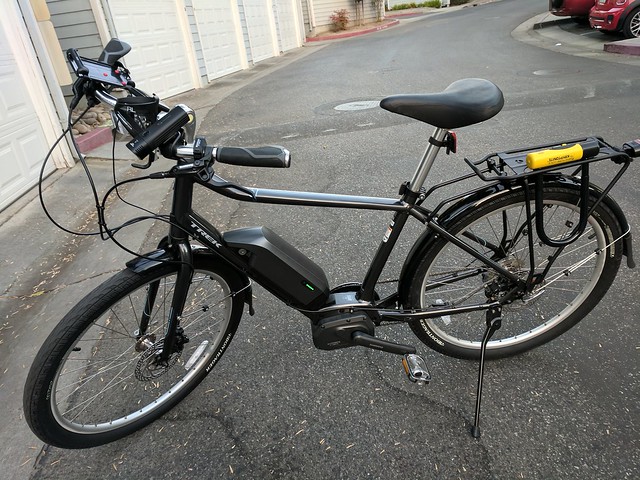 I got an ebike.  When I first started on the road with bariatic surgery I needed to set a weight loss goal.  I read having a goal for your first year is a good tool for your overall outcome.  Shortly after setting that goal I told Kate, "If I hit my goal by my first anniversary, you are going to buy me a Vespa."  This made Kate laugh and she agreed to it.  It was a running joke between the two of us for the past year.

I had been on track to hit my goal weight from very early.  I was sure enough I would hit it I've been thinking about what I'd do when I achieved. Part of me wanted a Vespa because I was too heavy to ride a scooter before.  I guess the mod/new wave esthetic is still someplace in my head.

Vespa's are expensive and I am not sure I'd want to spend that kind of money on one.  I thought about what other things I could buy with that money.  Part of me thought about a used Miata, before losing the weight I was too heavy to fit behind the wheel. My problem is we don't have a place to park it without cleaning out the garage.

I've also been looking at a new bicycle.  I've been looking at commuter bikes.  I like riding my bike to work, but it takes a lot out of me.  There is a really nice trail that is about half the trip.  Somewhere I decided to look into an ebike.  I thought it might be something that get me to ride my bike to work more often.

This is where the struggle happened for me.  Do I want to get something that is pure fun or do I want something that I want, but might not really need.  I don't need a either, but one is somewhat practical.  If it is faster or me to get to work on my bike, maybe I'll be able to ride it more often.  It will cut down the time it takes me to get there,

After a test drive and some research I decided I wanted peddle assist ebike.  This would still get me exercise but still make getting to work easier.  I ended up buying a 2017 Trek Lift+.  It has the Shimano Steps motor system.  It is a city/hybrid bike.

I really enjoy riding it.  The first thing I notice it is I move faster, but I still need to work to get it going.  I can move faster and still get a work out.  The second thing I notice it that moving faster on a road feels safer.  I road on Winchester Boulevard yesterday.  The last time I biked on it I didn't feel safe, but this time felt less scary. The bike has a top assist of 20 miles per hour.

My goal is to ride the ebike to work three times a day.  Lets see if how it goes.