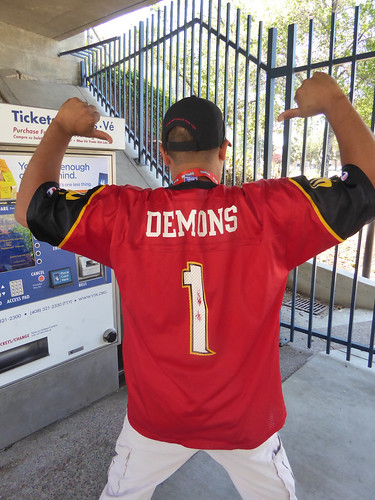 It looks like Vince McMahon really is going to start a new football league.  I have some tips for Vince to make this more successful than the XFL.

Admit it is a minor league and embrace it -  Minor league baseball is a good business in America.  People fill out AAA and AA stadiums all over America in the summer.  I think America's love for football could support a real minor league.  This minor league needs to be in minor league cities, much cheaper ticket prices, and minor league promotions.

If you are successful in the long run, you could affiliate with the NFL.  This is a long shot, but trying to do this gives you a good sent of ideas of how to run your business.  It is the kind of guidance that will help all your employees make the right choices.

In the long run having your players show up in the NFL can give you the "See the stars of tomorrow today" feel.

Play by the NFL rules - This connects to the tip above.  Your players are trying to get ready to play in the NFL or have just washed out of the NFL.  Changing the rules does not help anyone.  I know everyone says they had the pass interference rules, but the truth is it makes the game flow better.  Don't think you can rebel against how the game is played on the field.

Allow players to start in the league at 18 years old - If you can get players to by pass NCAA football, this is your best market efficiency to exploit.  You can tell an 18 year old who wants a paycheck they can get a paycheck in your league.  You can pick up players who want to leave school a year early.  You might not get 5 Star college prospects, but I think you could get a fair number of 3 star prospects.

You are in this for the long haul - You need a business plan that will survive even if you lose all your partners in the first year.  If you don't have this business play, why are you starting in the first place.  You need to be confident you can last 5 years no matter what.

Don't count on cable or broadcast TV - The safe bet is cable and broadcast TV are not going away, but they are not paying for content in the same way.  You need to plan for the sports rights bubble to pop during this leauge's first five years.  There is so much more established sports properties out there, you will be last in-first out if something goes wrong.
Labels: advice football NFL pro football Vince McMahon XFL