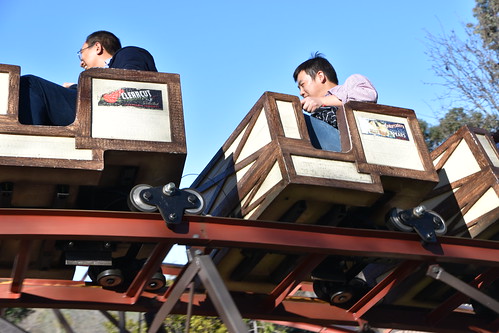 With Aiden seeming to be interested in Amusement Parks, this excites me for future vacations. I want to go visit other amusement parks. It makes me think about the Amusement parks that are on my check list.  It is true that I might want to go there a couple of times while Aiden gets older.

1. Legoland California - Legoland California is an interesting case because it has a rep of someplace that is good for young kids, but not so much after that.  I want to go there within the next year or two.  After our first trip there, I can figure out how long Aiden will like it.

2. Sesame Place - This is another younger focused amusement park. I know this park is nothing like it was when I was there last.  I think Aiden will like it.

4. Disney World Resort - I want to wait to go to Disney World until Aiden is at least 48 inches tall.  That will be a big trip.  I want Aiden will be able to ride everything.

5. Magic Mountain - I have driven past Magic Mountain more than 20 times.  Some day I'm going to stop there.  I want Aiden to be able to ride most of the rides first.

6. Dorney Park - I want to see how my memory meets the present.

7. Dollywood - I have family in Tennessee, but somehow I've never been to Dollywood.

8. Six Flags Great Adventure - Yeah, I want to see what the park of my youth is like now.

9. Mall of America - It is an Amusement park inside a mall, what is there not to want to see?  I am just sad I didn't get there when it was Camp Snoopy.

I do not think I will get to these amusement parks in this order.  Some other parks will creep in also.  I look forward to increasing the number of parks I've visited.
Labels: amusement park list travel