Cody is both a heel and a face, not neither 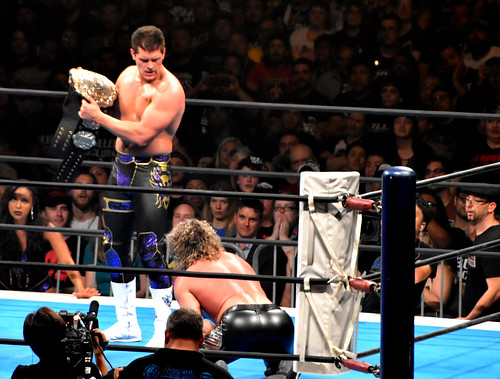 Yesterday after watching a recent 10 Pounds of Gold Episode I made this tweet.


To my surprise Cody Rhodes tweeted me back.


Of course this just blew up my tweet all over the internet.

A little background, I thought Cody would have a hard time being a heel after putting on All In 2018.  He would have fans just for the fact he is seen as standing up to the WWE by trying to put on his own big show.

This tweet is dense with meaning.  I know this is something either he has been saying for a while or thinking about for a while.  It is concise and every word is important. Let's look at the tweet: Just a wrestler. Those don’t exist anymore. Crowds/context are different every single time.

Those don’t exist anymore - I know there are plenty of people who want to say that heels and faces don't exist anymore.  I don't agree with this.  There might be some definition of faces and heels that do not exist anymore. There are some old ideas, like heels can't use exciting moves seem to be long dead.  That said, there are still heroes and villains in most wrestling stories.

Crowds/context are different every single time - This is a super interesting statement.  I agree that being a heel or a face is totally dependent on context. What many wrestling commentators forget is that actions that make you a heel in one situation can make you a face in another.  It is all about how the crowd sees your actions.

I think this is really important in the current indie wrestling world that Cody Rhodes is living in.  Wrestlers have to have the chance to be a hero in the Ring of Honor, while being a villain in New Japan Pro Wrestling.  I think this is something we don't talk about enough when talking about wrestling stories.

I asked this question because I can't see wrestling fans boo Cody Rhodes for the foreseeable future. I think he has put together a year that makes wrestling fans want to see him succeed.  In the long run I think fans wanting to see a wrestler succeed is what makes a wrestler a face at the most basic level.