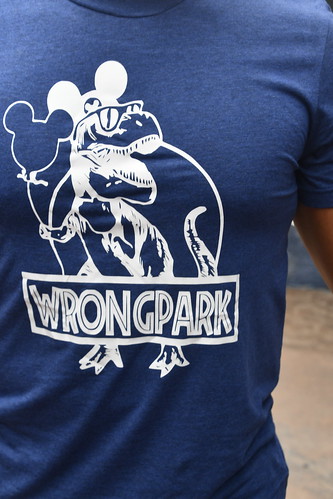 When I'm at Disneyland I play a little game with myself.  I spend a lot of time watching people and noting what t-shirts they are wearing.  It is clear to me that some people put time and effort into what they are wearing.

Here is the list of t-shirts I keep my eyes out for.
Other Disney Parks
Other Theme Parks and Rides
Non-Disney Characters
Pro Wrestling
Non-California Sports Teams
Non-Disney Movie T-Shirts

I take special note of:
DC character who are not in the Justice League or Batman Family/Villain
Marvel Characters not in the MCU
Non Marvel or DC Superheroes
Disney Characters who do not have current Theme Park Representation
Non-Disney Characters who have never been theme park characters
The ratio of WWE v. Non WWE wrestling shirts
The number of different Pokemon I can catch on shirts

I wonder if anyone else does this.